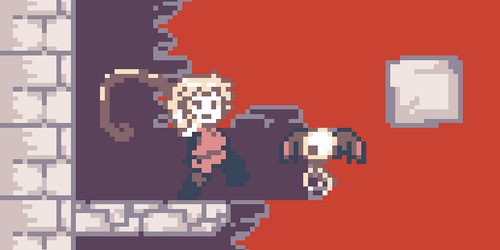 From the earliest design-stages on, Coria was always going to wield various weapons. The first one we implemented was her trusty rapier - due to her upbringen as lower nobility, Coria trained using  that elegant and practical weapon - therefore, the rapier is Coria's strongest attack - she even can use the weapon for combos.

Still, there are alternatives. One of the first weapons we envisioned was a whip - an action-game staple since the first episode of "Castlevania". Therefore, we didn't simply want to copy the whips function(s) from that classic, especially since that would promptly invalidate the rapier as the main-weapon. Therefore, the whip's primary function is now to stun enemies for a short while. While the whip does deal a bit of damage, it's not too useful for completely dispatching foes.

The current advantes of the whip are the larger range (it can also hit overhead foes) and the stun-function. After playing the demo, what do you think? Does the whip work in the game's context? Is it too strong? Too weak?

One thing that is not yet implemented: The whip will have more uses that simply attacking - a design-philosophy straight out of Nintendo's playbook. Tools and weapons should always have multiple uses!

And one more thing: In an earlier design-stage, weapons were supposed to be swapped through by pressing the select-button. However, we found that a bit cumbersome after a while and decided on a more direct approach - therefore the whip is now used by pressing ↑ and the attack-button.

The rapier and the whip also won't be the last weapons in Coria's arsenal - please look forward to what we will announce next!