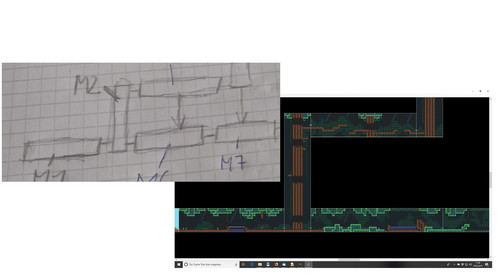 Today, we'd like to give you a first little insight into the design-process of the levels. While we have some nifty tools at our disposal, more about those soon, every scenario starts out as a simple pencil-map on graph-paper. While we aren't marking every single tile on paper (we tried that very early in development and it didn't make much sense), we're sketching out the general flow of a scenario, the various maps and their connection on paper.

If you look closely at the picture, you can see an earlier and expanded version of the Miun Woods, the scenario you can play right here on itch.io in your browser. In this earlier incarnation, there are more spikes and longer pits - things we removed because they either just didn't feel right or they would need player-skills not set present in the demo.

Even more important: In the second screen, the scenario gets a lot of verticality - Coria will be able to climb the trees and explore the upper regions of the forest as well. We removed that because... well... we don't want to spoilt too much now, do we?